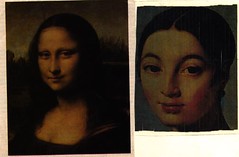 lisa & riviére
Originally uploaded by blanket sin.
One of the these pix was published in a Times article a few weeks ago. Although Mona Lisa has received so much attention, the Art Review from Sunday 9 April 2006 used one of Jean-Auguste-Dominique Ingres paintings for the review As boldly eccentric as his times by Christopher Knight.
In the caption of the L.A. Times, this picture is called PORTRAIT OF CAROLINE RIVIÈRE, but in a book about the painter's life called INGRES THEN, AND NOW, Mlle Rivière. It's no big deal. I'm just surprised that I eventually figured out who painted this young lady with the Mona Lisa resemblance.
I clipped this picture out of a Rolling Stone magazine and had it laminated. I use it now as a bookmark, but I had to put it together like a puzzle as the rendition of it from RS was shredded and blended with another shredded picture of an airport.
Collapse