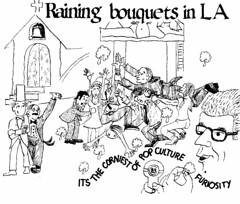 thatsok
Originally uploaded by blanket sin.
I started a new book this week. It's called Lolita. I hear a lot of things about it, some controversial, some indicating its ban in the US, or am I thinking of Salo: the semiotics of death? Anyway, I got my hands on a copy and I think its good so far.
How about this weather? This year I've decided to borrow a fan for the living room. The heat's just unbearable. I told myself last week to get a head start on this illustration garbage so that I would have the weekend to sit and read, or go to places like the Lotus Festival, or 1638 Cahuenga on Fridays. I'm so weak willed that during the week I'll have an urge to watch a DVD.
One and a half hours of my life I spend, once or twice a week, vegging out in front of my TV. That's not the kicker, though. I almost picked up the movie Brokeback Mountain. I know this is a very, very exceptionally made film. Most of the reviews talked about it, and it also won a few awards. What I didn't hear, or read, was how it grossed more than Truman Capote, and by that I mean, HOW? Here's my theory. According to census reports, it's believed that the population is dominated by females. That's it. Just like males love to go see rated R films with sexual situations and nudity, females have that same desire.
I've always held true to the idea that good entertainment is hard to come by and that films about love between men should be made.
My logic is twisted, but here it is for what it's worth. It's not right that the male portion of movie goers should enjoy two women getting it on, but not two men (unless they're happy in their current relationship and are not lonely). Just yesterday, I told a gf that I'm totally fine with lesbians, but what I dislike is bisexuals. Not true. I'm OK with bisexual men only because I would never become involved with a man. It is an awful feeling when a woman leaves a man for somebody else. I can only imagine how much worse the feeling must be if his lover leaves him for another female. And if that female happened to be in their circle of friends, I imagine the feeling would be "stand back everyone, I'm about to take my single and last dose of vitamin lead" if the other woman was somebody he had been attracted to, flirted with, fantasized about but she wouldn't have anything to do with him. So I think bisexual women are poison.
Collapse