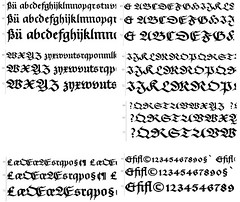 2nd January, 2008 ©
Today's blanket sin
This is the closest I've ever come to finding a font remotely resembling a sample copy I keep stashed in a file. Just call me pack rat. I had a copy of a one liner sample from a reknown calligrapher from one of those how-to books on calligraphy. He called it Fraktur Revival, but I've never been able find an equivalent font version on-line. At least not by searching under the keyword "fraktur revival". What I'm so desperate to find in a font file is basically just a simple, rough, freehand rendition of black letter, see image, with the accentuations that differ regular Antiqua style print preserved.

I guess I was motivated to try again to pull up something similar using I.D. that font, a web site I found plugged in a blog called I heart typos. I had to scan my copy into photoshop to adjust the greyness of the background and separate the letters a bit since they were running into each other. I'm getting good at using photoshop for minor touch ups like this.

Meanwhile, I can't think of anything to draw. Comicstrips seem so silly to me now, in comparison with the manga I've seen published. That's where the money is in cartooning, big, wide eyes with tear drops building in them.

There was a nifty little line that was brewing in my head. It occurs when
a guy tries unsuccessfuly to pick up on a woman who doesn't want anything to do with him.

GODDESS
Hi. Where? … to the supermarket?
SINGLE GUY
I know what you're thinking. I don't mean to be flirtatious. I'm not the kind of guy who picks up on women
GODDESS
Oh? Maybe that's you're problem. Look, before you say anything further. I'm taken.

SINGLE GUY
Oh really? That's okay with me, you know. I'm not the jealous type and, well, as long as you're not married or anything serious like that…

GODDESS
You know what, eat shit and die!

The goddess woman then swings herself around and walks away.

SINGLE GUY
Who's shit are you talking about? 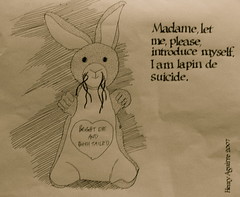 2nd January, 2008 ©
Today's blanket sin
In chapter 7, page 149, 3rd ¶, of The shock doctrine,, some history from bygone days when I didn't know what was going on in the world, at Belmont High. Fast times.
I guess what really cracks me up about this paragraph, which I need to go back in and edit because my typing skills at 100WPM aren't what they use to be, is the formula for calculating the average wage. I know I'm being critical about it, but who's to say that minorities shouldn't be counted in with the rest of the population when doing the math?

NAOMI
The minimum wage never recovered its value and 2 years into the program, real wages were down 40 %; at one point they would drop 70%. In 1985, the year of shock therapy, the per capita average income in Bolivia was $845; 2 years later it had fallen to $789. This is the measure used by Sachs and the government, and despite the lack of progress it conveys, it does not begin to capture the degradation of daily life for many bolivians. Average income is derived by adding up the country's total income and dividing by the number of people in the country; it glosses over the fact that shock therapy in Bolivia had the same effects that it had in the rest of the region: a small elite grew far wealthier while large portions of what had been the working class were discarded from the economy altogether and turned into surplus people. In 1987, Bolivian peasants, known as campesinos, were earning, on average, just $140 a year, less than one-fifth of the "average income." That is the problem with measuring only the "average": it effectively erases these sharp divisions.

A mouthful, but I think I better re-read this and make more sense out of it before I analyze it. Word problems were always hell for me in school too.
Collapse