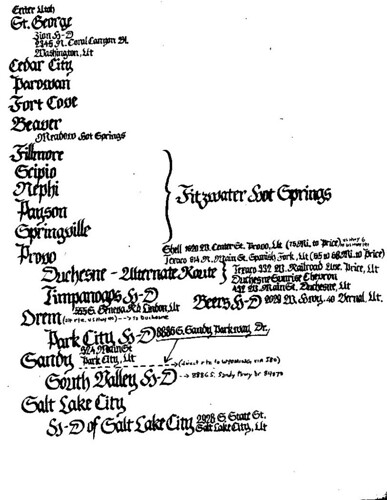 I got this sample from a font named fraktur? I can't remember anymore. It's another variation of black letter, I suppose. Or is that fat letter? In any case, I think I have this lettering script memorized. Except for capital V. That one puzzles me and I find myself cheating and looking at the sample.

I know it's bad. Somewhere along the line I lost my concentration and focused more on content that quality. The names on this list (Utah167.jpg) are cities in Utah that the I15 runs thru from Nevada to Salt Lake City. I tried to develop a pattern in composition so as to facilitate alternate routes. For instance, upon reaching Provo, Utah, I might be inclined to travel the scenic route to Wyoming instead of going thru Salt Lake City. I tried to indent pit stops as well as alternate rerouting.

It needs a lot, a lot of work. Maybe a typewriter would be easier. I won't even consider computers for the job as my inkjet printer would no doubt produce a print out that could easily smudge under humidity or rain. This copy is actually done in a water based ink. The only water tight writing is the penciled notations.

Wyoming is still in it's rough stages. (Utah167.jpg) is a second or third rendition as I kept adding more information to it. Gas stations, miles to next pit stop, possible resting points, and Harley Davidson dealerships along the route. In (Wyoming168.jpg), I haven't done but the one copy, and having already learned what information would be pertinent to have when I scoured google maps for gas stations along the I15, I had all my information ready for calligraphing. I don't know whether I will continue scrutinizing Wyoming for variables until I consider Colorado as another optional route. I'm liking Colorado more and more as I contemplate the possibilities of revisiting during the Sundance Film Festival.
( Collapse )