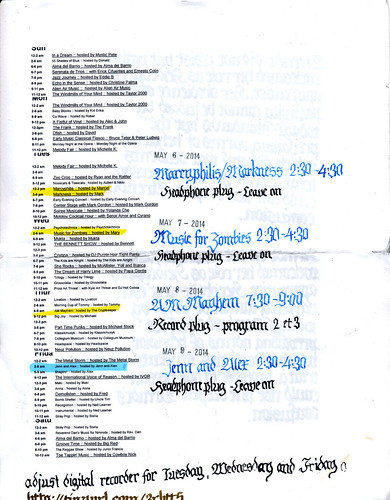 Do you remember when people needed to go to the library to look up a word in an encyclopedia? If you remember that, then surely you know you are a dying breed.

So, I'm at work and I'm doodling with the calligraphy pen, looking for stuff to write. It happens that I recently discovered a radio show called The metal storm on KLXU 88.9FM and never got around to figuring out how to hook up the digital recorder so that I could record the show, which aired between 12midnight to 2:00AM, ended. Unfuckingfortunately, when I finally figure out the recorder, I hook it all up and I'm hearing a show called Night shade. What a fucked up thing to do, btw, to people who use to listen at that hour and come to realize the fucked up crap they're spinning would cause intense vomiting from a headbanger upon switching on the radio. So I go online… google… find some announcement about the guy to created Metal storm is retiring. Well, good for him.

I print out the program schedule. I see it hasn't been updated since January. I decide to choose another show as I've heard some pretty good tunes playing on this radio station from time to time. I highlight some shows I decide to record at night, then listen to at work. I use my calligraphy to write notations. Here: you can see for yourself in the picture on the right.