I requested a day off. Sometimes working 5 days a week is too much and a break somewhere in the middle, like hump day, goes a long way for catching up on chores and cleaning. I’ve been living off homemade hamburgers lately, and prep time still seems to wedge into the free time I need to brainstorm dumb ideas for composing typewritten pages on my typewriter.

Tomorrow’s day off comes to you by the kind folks of SLAYER! whom touring dates revealed a show in Arizona. Unfortunately, it doesn’t seem like I’ll be attending this performance in their farewell tour. Because I saw their concert at the forum in L.A. a couple years back when Hanneman’s replacement was already touring with the ban, I figure I won’t be missing anything I haven’t already seen. (Without Hanneman, there isn’t going to be much in the area of new material.)

Although I miss hanging out with friends at bars, as soon as I complete at least 3 tasks tomorrow, I’m calling for a free day to explore new watering holes in the vicinity. I have errands to run around town anyway.

It was one year ago approximately when a crooked cop thought he could pull a fast one by writing out a traffic citation in his chicken scratch penmanship. Below is a picture commemorating the rip in my pants after he tried to get at my penis with his mouth. I was not resisting being detained until he dropped on his knees to try an rip a hole in my pants using his teeth. When that didn’t work, he pulled out his service gun a let out a round which grazed my jeans causing the denim to rip.

These jeans were in pristine condition, and they are not your mainstream brand of Levi’s or equivalent brand which has begun the practice of combining spandex with denim to reduce productivity costs. 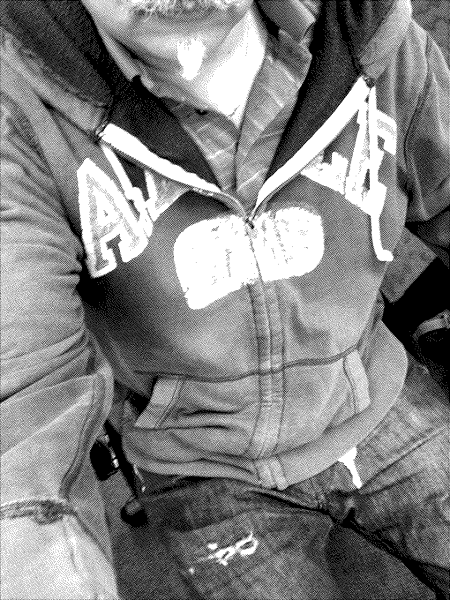 Bullet hole
One would think it horrible that a crooked cop took liberty to rip my clothes only to look at my dick, but the bullet I took seems to have affected coordination of my right leg, which I now have to numb the pain in with drugs. I’m not surprised that law enforcement has become so hard up as to attempt to sexually harass law abiding citizens.

If you think that wasn’t stressful enough, when I filed my intent to fight the ticket, I was told to submit payment of bail in the amount of $300sum. Note, this all happened in April 2018, and I’m just now receiving the refund for the snafu which this corrupt officer started. On my court date, Officer Gonzales was a no-show — an obvious admission of guilt and avoidance of the ridicule he undoubtedly would’ve received of his fetish to need to suck cock.
Collapse